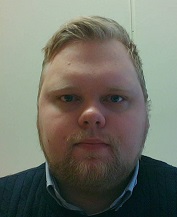 Alexander Meyer Sjøberg defended his thesis on January 30, 2020. The title of the thesis was “Estimation and Control on Lie Groups based on Formulations on the Lie Algebra”. The opponents were prof. Lorenzo Marconi from University of Bologna, Italy and prof. Alex Alcocer from Oslo Metropolitan University. The title of the public trial lecture was “Simultaneous localization and mapping (SLAM) for autonomous driving”. The evaluation of the trial lecture said: “The candidate gave a very good and clear presentation on the given trial lecture topic, made good use of the time frame given, and had good command of the English language. The candidate made good use of slides and multimedia in the form of videos and pictures. The presentation was catchy and definitely inspiring for students willing to have an overview of the topic. The candidate succeeded in calibrating the presentation without overwhelming the audience with heavy mathematics, but still provided good insight about the mathematical problems that characterize the research field. The presentation was also interesting for persons not in the field. The candidate structured the presentations in three blocks: (1) clustering the research field of SLAM with an historical perspective, starting from the ICRA conference in 1986 up to recent developments. He gave a very nice overview of the classic and the algorithmic age of SLAM. (2) An overview of the mathematical approaches to both sparse and dense SLAM. In case of sparse SLAM, the candidate presented the mathematics of the EKF SLAM methods, showing the pros and cons of the method in terms of computation efficiency and scalability issues. As for the dense SLAM methods, the candidate sketched the graph-based solutions, focusing on the computation issues in the presence of detailed maps. (3) SLAM for autonomous driving with a research perspective. In this case, the candidate presented two main projects that have dominated the field in the last years: The DARPA grand challenge and the Google Waymo project.”

The evaluation of the PhD thesis stated: “The thesis deals with many aspects pertaining estimation and control of dynamical systems whose states live on manifold. A specific attention is given to states given by rotation matrices and quaternions able to represent attitudes in a singularity-free way and homogeneous transformations able to describe attitude and position of rigid bodies in a combined way. The main contribution of the thesis is to show how generic attitude and position control and observation problems for rigid bodies can be systematically solved using group theory. One of the key ideas is to systematically map the matrix group equation into the associated Lie Algebra on which many computations are easier and computationally more efficient. The advantages of the proposed solution is that the framework is singularity-free.”