– The cooperation between academia and industry makes it especially pleasing that Offshore Mechatronics is awarded SFI status, rector Torunn Lauvdal said in her opening speach.

The event took place at Hotel Ernst in Kristiansand. Researchers, partners from industry and others were gathered to mark the opening of the centre.

SFI Offshore Mechatronics will work on topics such as hydraulics, motion compensation, robotics, autonomy, monitoring techniques and data analystics. The goal is to develop and demonstrate methods, tools and solutions relevant for the industrial partners.

The research council will contribute with 12 million kroner per year for a total of 8 years. Including the cash and in-kind contribution from the partners the total is about 200 million kroner to research, development and innovation during the period.

– This is research and innovation at the highest level, Eirik Normann, Head of Department in the Research Council said. He explained why such centres are important:

Need for knowledge and Restructuring

– We knew the need for restructuring in this industry would come. Investments in oil&gas do not give the same returns as before in the coming years. In this situation knowledge and competence are important for Norwegian industry, Siri Mathiesen, regional director NHO Agder, said.

The partner companies pointed out the need for knowledge and innovation. The timing for SFI Offshore Mechatronics could not have been better. Now is the time to think long-term to make the technology sector within oil&gas more profitable and innovative. – Research is the tool – innovation is the desirable result, Johnny Olsen from National Oilwell Varco said. 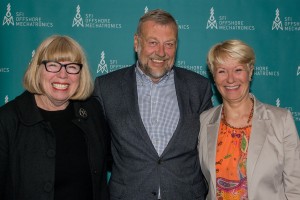 On April 21 the General Assembly had it’s first meeting at UiA. In this meeting a board was elected, the preliminary budget for the first 3 years was presented, as well as the initial research plans for the same period. In addition and a few new members were elected into the centre.

The partners in SFI Offshore Mechatronics are:

This page was translated from a Norwegian article by Irene Hetlelid Svendsen (text) and Sara Ojanen / Tor Martin Lien (photos).